Penn State alumnus John Urschel ’12, ’13g Sci has made many important decisions in his life. We are happy that he decided to join us on March 9, 2021 to discuss his autobiographical, Mind and Matter: A Life in Math and Football (2019), co-written with his wife Louisa Thomas.

John’s love of football came from his father. His love of math started with his mother who encouraged him to play puzzles and games as a child. When asked if he would ever write a children’s book about math, John said probably not. However, he originally started out writing a book only about math until his publisher urged him to incorporate his football career.

It was his appearance on a fall “Football Letter Live” that inspired “An Evening with John Urschel” our first bi-coastal, joint chapter, book discussion. It’s not every day you can talk about a book with the author who happens to be a fellow alumnus. We joined with our co-hosts from the Washington-
Greene chapter and other alumni around the country.

John is currently completing his PhD at MIT which he started while playing guard for the Baltimore Ravens. That was a decision he is not sure he would make again. John has won academic awards for his math prowess including the William V. Campbell Trophy, known as the “Academic Heisman”. In 2017 he was named to Forbes’ “30 under 30” in the field of science. At 25, he was among the youngest on the Forbes list. John uses quantitative thinking to make many decisions, and he especially used it for football where every play to him was like a formula.

Judy Wolfe ’70 and David Wolfe ’94 led the discussion of numerous themes in his book. Family and divorce, bullying, competitiveness, overcoming adversity, diligence and loyalty are just a few. John was at Penn State when Bill O’Brien took over for Joe Paterno, a most challenging time in PSU history. Despite offers from other prestigious universities, his decision to stay at Penn State is inspiring.

John still maintains friendships with his fellow Nittany Lions and Baltimore Ravens. His PSU roommate, Ty Howle, is godfather to his daughter. At some point John may consider coaching but for now he will remain at MIT to teach.

Twenty-three alumni joined us at the March 9 evening Zoom event. One attendee from each coast won the prize drawing for attendees. Following the event and keeping the math theme, John surprised each of us with a book gift, My Best Mathematical & Logic Puzzles by Martin Gardner.
We thank John, a current member of Alumni Council, for being a loyal alumnus and taking the time to join us. Mind and Matter: A Life in Football and Math is an inspirational book for all ages. We hope you will read it and continue to follow John Urschel’s remarkable career. 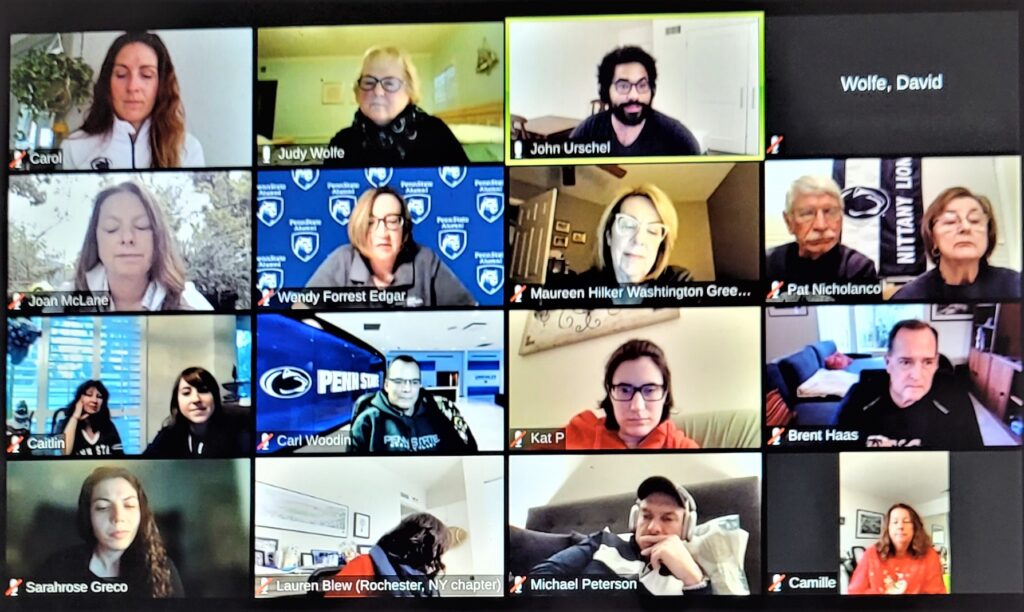