The Penn State Orange County chapter is committed to supporting the interests of Penn State and its alumni by participating in community service, social activities, student recruitment and scholarships.

The Orange County Chapter of the Penn State Alumni Association was originally chartered in 1986 by Dick Jantzer & Tim Davis, who decided to break from the LA Chapter to form a “Club” more convenient for the many alumni living and working in Orange County.

Two years later in 1988, the Club officially became a Chapter. “Orange County alumni needed its own representation of the University with activities that met our unique style, personality, and geography,” says Founding Member and President, Dick Jantzer.

Our chapter has grown year after year, consisting of both older alumni who settled in towns like Irvine and Huntington Beach back in the 60’s and 70’s when aerospace companies like McDonnell Douglas were attracting Engineering majors to this area, as well as newly transplanted recent grads who are looking to get a fresh start on the West Coast. We also have natives of Orange County who attended Penn State and returned to their roots to re-invigorate our alumni. A new segment of our alumni in the area is comprised of Penn State World Campus students who earn their degrees online.

We’ve changed our football viewing party venues many times over the years, but one thing is consistent: On Saturdays during football season, we get nearly 100 fans to join together to root on Dear Ol’ State and partake in TV party traditions unique to our chapter. Win or lose, WE ARE! We consistently have bar tours, happy hours, networking events, themed parties and holiday gatherings, fundraisers, community outreach initiatives and more. Also check out our chapter merchandise that we sell to raise money for scholarships!

Every penny we raise through hard work and generous support goes toward the Chapter’s Endowed Scholarship Program. Each year for the past 10 years, OCPSU has awarded at least $10,000 in scholarships to OC and Inland Empire students. Chapter volunteers participate in dozens of college fairs throughout the school year in O.C. and neighboring counties. Proudly, the Orange County Chapter was the first alumni chapter in the nation to reach $100k for its endowment with the university thanks to fundraising efforts and contributions from our generous members.

We encourage you to get involved with the Chapter and show your support for the Nittany Lions. We are always looking for help with social media strategies, fundraising projects, and college fairs. Come meet us. We don’t bite, WE ROAR!

Our board is an eclectic group spanning every decade from the fifties to date. The combination of past experience, diversity and new energy is key for our chapter as we grow, embrace new technologies and maintain our traditions. 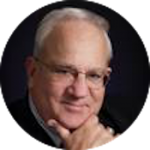 Dick hails from Erie, PA. At Penn State he majored in Business Administration and works as a Real Estate Broker & Property Manager. He’s helped many Penn Staters in O.C. buy a house. The birth of his son in Bellefonte and his fraternity brothers are his PSU best memories. Dick joined the Board to give back to Penn State, 4 wonderful years of his life. He always tries to instill and cultivate a passion in our alumni for all things Penn State. Dick is an OCCPSAA Founding Father. 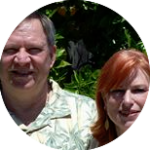 Timothy, who lives in Fountain Valley, CA, graduated with a degree in Aerospace Engineering. He worked as a government civilian for the Air Force Space System Superiority Directorate on a program to perform “FAA” in space.  He very much misses Creamery Ice Cream, walking the beautiful campus, and being in his hometown of Boalsburg, PA.  Tim was a founding father of the OC chapter and has been a board member since.  “One of my first duties was to help start our scholarship program as well as serving as secretary for several years.”  What he likes most is attending TV football game parties when he’s able. 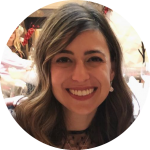 Originally a native New Yorker, Valerie made Southern California her home in 2016. Valerie joined the OC PSU Board in 2018 in an effort to expand her network, create friendships, and give back to the community. As a Board Member, she is responsible for the creation and ongoing development of the website, which stems from her background in Graphic Design & Marketing. She also oversees all of the chapter’s content creation and social media channels. When Valerie’s not participating in any PSU events, she can be found helping Real Estate Agents at Zillow Group, at the beach with her Alaskan Klee Kai, or traveling with her husband, Nathan, who also contributes to the website! 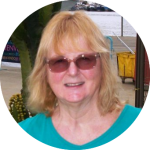 Judy hails from the Monongahela Valley and studied French at University Park.  She is a past president having served on the Board since the early nineties.  Judy is an avid card player and a travel agent specializing in river and ocean cruises and European travel.  She has organized local cruises for the chapter.  As an Italophile, her wish is for a future chapter trip to Italy. Along with her sister, Pat ’66, and son, David ’94, she is convincing her 3 grandsons to go to Penn State.  She cherishes the friendships she has with her Gamma Phi Beta sisters.  Judy is also instrumental in maintaining our Elm Level status – PSAA Chapter of Distinction. 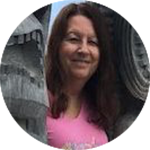 Camille, an Advertising major, hails from Shavertown. She misses walking around the beautiful campus, football games, late night grilled stickies at the diner and being with the friends she met her first term. Camille is the chapter’s social butterfly. She joined the Board to help our local chapter and to meet more PA/PSU people in SoCal. “I hope to make the chapter better by planning more social events for Penn Staters to get together.” 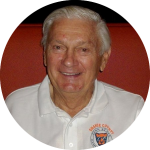 Robert T. (Bob) Hunter graduated in 1958 from the Eberly School with a Master’s Degree in Physical Chemistry. Bob and his wife Barbara went from State College to Metuchen, New Jersey. Bob’s first job was in Jersey City in the Research and Development Laboratories of Colgate Palmolive.  After 12 years (and 3 children) the Hunter family moved to Grand Rapids, Michigan where Bob became Director of R&D for the Amway Corporation. Amway acquired the Nutrilite Company in California and Bob was sent there to become the CEO. After a 40-year career, Bob retired in 1999. Always supporters of Penn State, Bob and Barbara began enjoying football with the OC Chapter in 2008. Bob is now the Chapter’s Treasurer. 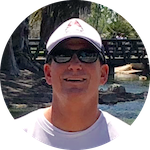 An Orange County native and alumnus of Dana Hills High, David has been involved with the Chapter since graduating in 1994. Holding positions such as Vice President and Scholarship Chair in the past, David is the outgoing Chapter President (2016-2018). Over the years he has made some tremendous friends among his fellow PSUers but has only returned to his beloved alma mater once since leaving Happy Valley, in 2004. Now a Board Member once again, David focuses on Scholarship, College Fairs, and supporting football game, fundraising, and community service activities. When David is not submerged in Blue & White, he’s monkeying around with his children, playing tennis, sailing, and utilizing his English Major degree to sell transportation and logistics services. 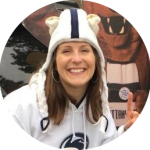 Carol graduated Sec. Ed with an English Communication teaching option. She is from Allentown. She is a Regional Manager for a multifamily property management company. Carol misses the seasons at Penn State, especially fall, and walking from her downtown apartment to the beautiful campus. She joined the Board to play a bigger role in PSU SoCal events and outreach. “I love that we continue to help past, present, and future Penn Staters connect for networking opportunities as well as lasting friendships. I continue to encourage involvement in chapter activities beyond the football season”. 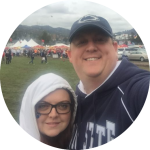 Brian, born and raised in Orange County, attended PSU Altoona & University Park campuses majoring in Communications. He is married to the beautiful Nichole Snyder, and is a huge fan of sports & social gatherings. His job is Plumbing Sales. What he misses most about PSU is having the time of his life. He joined the Board to meet and hang out with fellow PSU alumni and would like to see more younger alumni be actively involved. Someday he hopes the chapter will buy a round at all Football viewing parties. 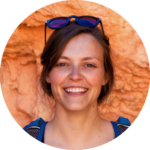 Originally from DuBois, PA, Lauren moved to sunny SoCal in 2019 to continue to advance her career. She joined the OC Chapter as a Young Alumni Ambassador in 2019 with hopes of maintaining that feeling of “home” and friendship with other Penn Staters in the area. As a board member, Lauren hopes to expand the young alumni participation in chapter activities. Beyond Penn State alumni involvement, you can find Lauren surfing or exploring a National Park. 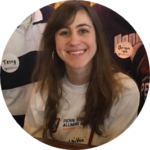 Caitlin is a local alumna from Irvine, and graduated from Penn State in 2013 with a double major in Supply Chain and Economics. Since graduating she has remained involved with the university by volunteering as an alumni mentor to undergraduate students through the Smeal College of Business. Caitlin recently moved back to Orange County and is excited to join the OC PSU Board after being involved as a member of the chapter since her freshman year. She is also a past scholarship recipient. What she misses most from Penn State are the fresh chocolate chip cookies from West Halls. 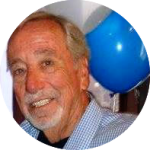 Sandy graduated Penn State in 1952 with a degree in Industrial Engineering. He currently lives in Irvine with his lovely wife, Sally. Although retired from sales and marketing, he uses his professional skills to help fundraise for the chapter every football Saturday. He’s been on the board for many years and is our chapter’s “resident schmoozer”. Sandy stays active by playing golf and socializing.

Connect with us on social media to stay up to date on the latest news and events. Social not your thing? Sign up for our newsletter instead.